Kentik continues to expand the agent fleet for synthetics, giving users more flexibility and locations from which to originate tests.

App agents, which until now were only available as global agents, can now be deployed as a private agent. App agents differ from network agents in that they support both network and web layer tests.

With private app agent support, customers can run network and web layer tests from within their environment. For example, customers can run Page Load tests to measure the performance of key websites from their branch or data center locations or any location they can install a private agent. In addition to web performance metrics, they can also collect network performance metrics — loss, latency, jitter, etc., to these destinations, with an app agent.

The app agents are initially targeted towards supporting new web layer test types (Page Load and transaction tests) but they are able to run all test types so users that want to install a single agent for all test types can use the app agent. The app agent can be deployed using Debian/Ubuntu, RPM or Docker packaging.

The agent will be marked beta as we continue to collect usage data/feedback from users. We recommend the existing network agent for non-web layer testing. 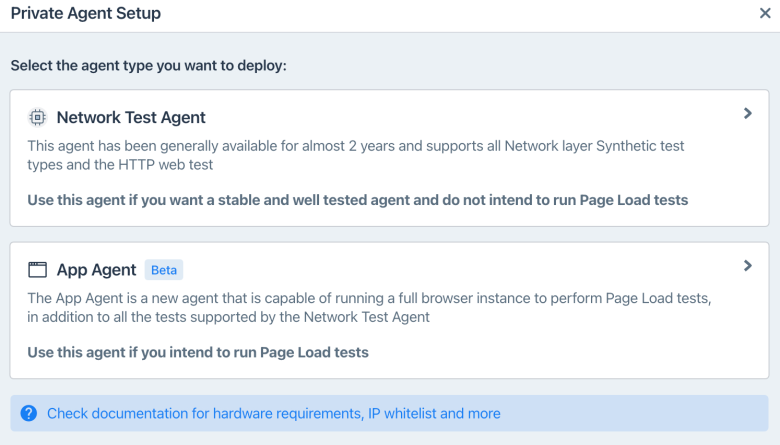 Read the Knowledge Base entry for Kentik App Agents.