It’s possible now to check for a traffic flows that were denied by the NSG rules configured on a Subnet or VNET level.

There are two ways how you can see that traffic:

Data Explorer: Filtering based on tags for AWS

Kentik Data Explorer supported filtering based on instance tags for a while now, but now we are expanding the tag support for other cloud objects as well, such as: VPC, Subnets, ENI, VPC endpoints and Transit Gateway attachments.

No matter what object you assigned a tag on, you can use Data Explorer for filtering traffic flows related to those tags.

After that you can automatically populate your custom dimensions with AWS tags and pick what fields you want to use in your Data Explorer for filtering.

After Kentik will populate custom dimensions that were chosen (can take up to 30 min), they became fully available in a Data Explorer, under the section “Custom”.

This will allow you to filter the traffic flows using the tagging and naming convention of your organization, for instance to see the traffic of a particular team, business unit or division.

DNS was designed in the 1980s when the Internet was much smaller, and security was not a primary consideration in its design. As a result, when a recursive resolver sends a query to an authoritative name server, the resolver has no way to verify the authenticity of the response. DNSSEC was designed to address this issue.

Up until today, the DNS Server Monitor Test only allowed a user to monitor the DNS resolution for a given hostname from specified Name Servers. Users can be alerted if the resolution time crosses a particular threshold or if an unexpected DNS response code is received, or a non-allowed IP is answered.
However, these tests previously did not validate the DNSSEC trust chain of the received record.
Enter DNSSEC Validation.

How can you configure DNSSEC validation?

When enabled for a given domain, the test will recursively check the validity of each signing entity in the chain from the authoritative name server up to the root server. The result will be either a positive or a negative response. The DNSSEC record is either fully verified or it isn’t. 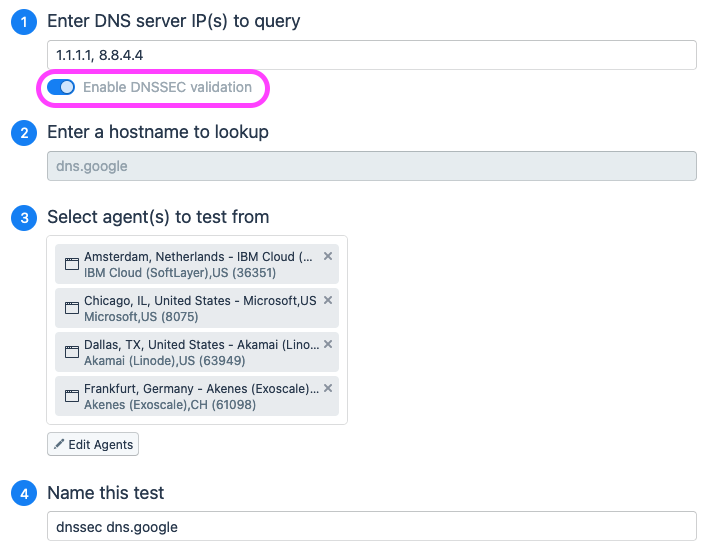 When the option is active, the test results will show the DNSSEC validation status for each one of the Agents involved in the test.

Traces for the DNSSEC validation for each agent will be available by clicking on their respective status icon on the previous screengrab. 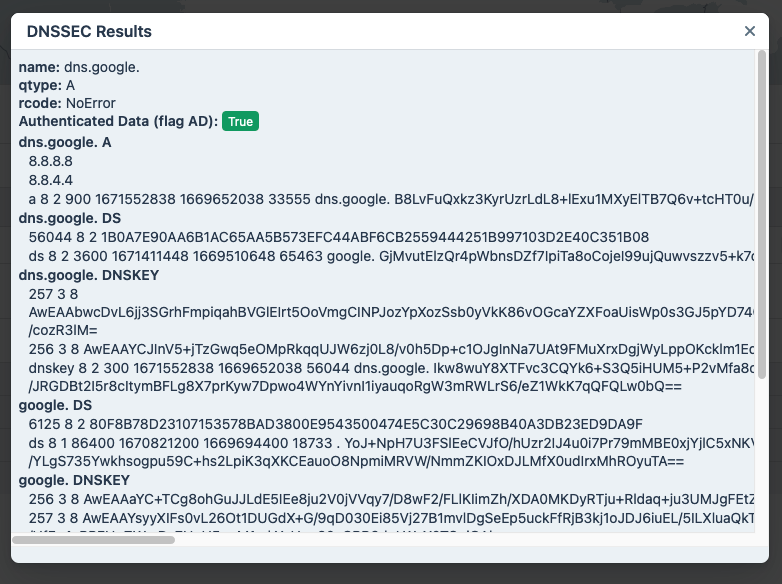 Health options remain the same as the DNS Server Monitor test. DNSSEC validation will have a boolean result. If validation is successful it’s a healthy result, if not, it's critical.

If enough agents have a critical results (see screenshot above) to meet the sub-test threshold condition, an alert will be triggered.

Be advised that setting DNSSEC validation is available to all agents except Private Network Agents. As a reminder, our new Private App Agents not only include all of the capabilities of the legacy Network Agents, but also include the capabilities required for advanced Web tests such as Page Load Tests and Transaction Tests.

If you currently run our legacy Network Agents, please consider replacing them with our new App Agents to gain access to all of the feature we will add in the future. Kentik's entire fleet of Network Agents has already been migrated, and support for the Network Agents will be phased out in 2023 (more to come on this soon)

As of now, users can set their own DSCP values in any Synthetic Monitoring Network test.

While Network Tests initially defaulted to Diffserv codepoint "0: Best Effort" for every Network test, they can now be set to any value, allowing our users to more realistically test the behavior of their own network and test along all classes of services they implement. 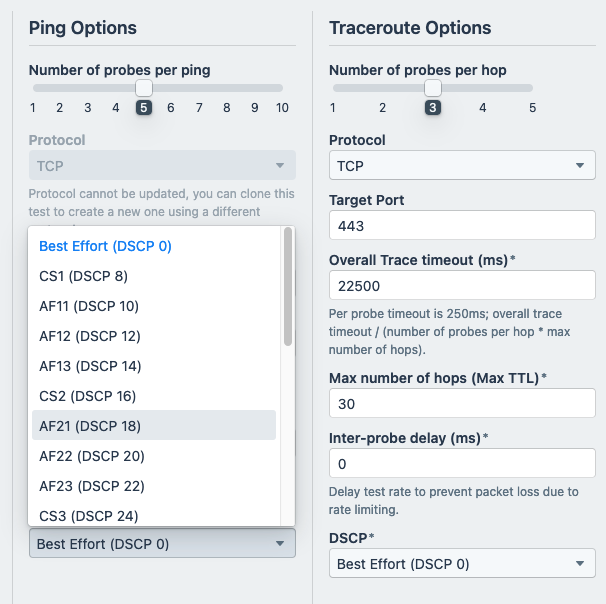 To see it in action, edit or create any IP Hostname Network test: in the Advanced Options, both Ping and Traceroute aspects of it can be set to different DSCPs.

Be advised that setting DSCP values for the aforementioned tests is available to all agents except Private Network Agents. As a reminder, our new Private App Agents not only include all of the capabilities of the legacy Network Agents, but also include the capabilities required for advanced Web tests such as Page Load Tests and Transaction Tests.

If you currently run our legacy Network Agents, please consider replacing them with our new App Agents to gain access to all of the feature we will add in the future. Kentik's entire fleet of Network Agents has already been migrated, and support for the Network Agents will be phased out in 2023 (more to come on this soon)

This may be a minor, but a widely requested improvement on the device screen: all SNMP community and SNMPv3 passphrases are now obfuscated in the UI.

This complies with widespread company policies to never display passwords in a web UI. 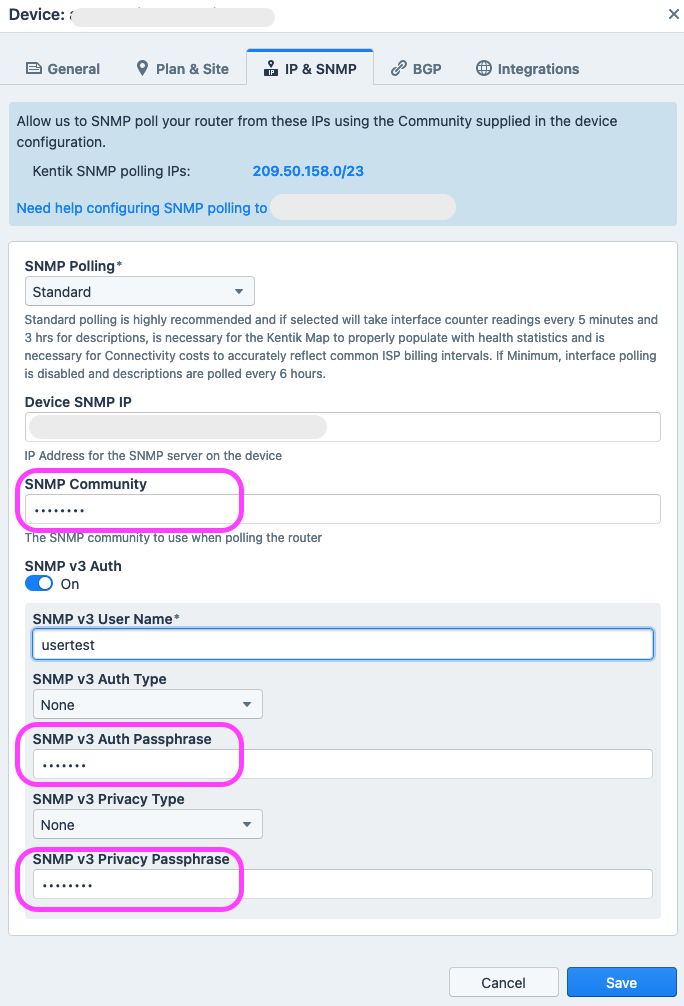 Kentik now supports collection of the NetFlow and IPFIX fields for position 3 MPLS Label in the label stack , which we previously not collected from the received flows. The related fields is shown in tables below:

This field is collected from NetFlow/IPFIX protocols and stored in the Kentik’s MPLS Label 3 and MPLS Label 3 EXP dimensions.

The support is available in kproxy starting from version v7.37.0. The example of the Data Explorer query is shown below:

When digging around in enriched Network Telemetry data, you'll find yourself noticing a bump, or a trough in any of the displayed time series and think to yourself:

Ask yourself no more, "Compare over previous period" is here!

This feature comes with a streamlined redesign of the Time Range query panel in Data Explorer.

Hitting the Compare over previous period switch will unveil options to be able to compare the current time range, to the same one at a configurable time in the past, such as: "this hour with the same hour yesterday, or a week ago..." 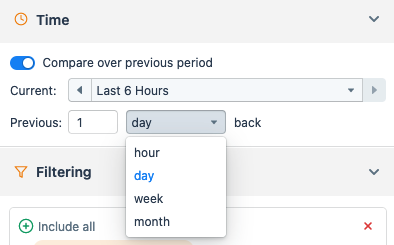 Upon selecting this option, your data-table will now include two new tabs:

From any of these 3 tabs, you will then be able to select any time series and look at a combined line chart displaying both the current and previous period for the selected time series. 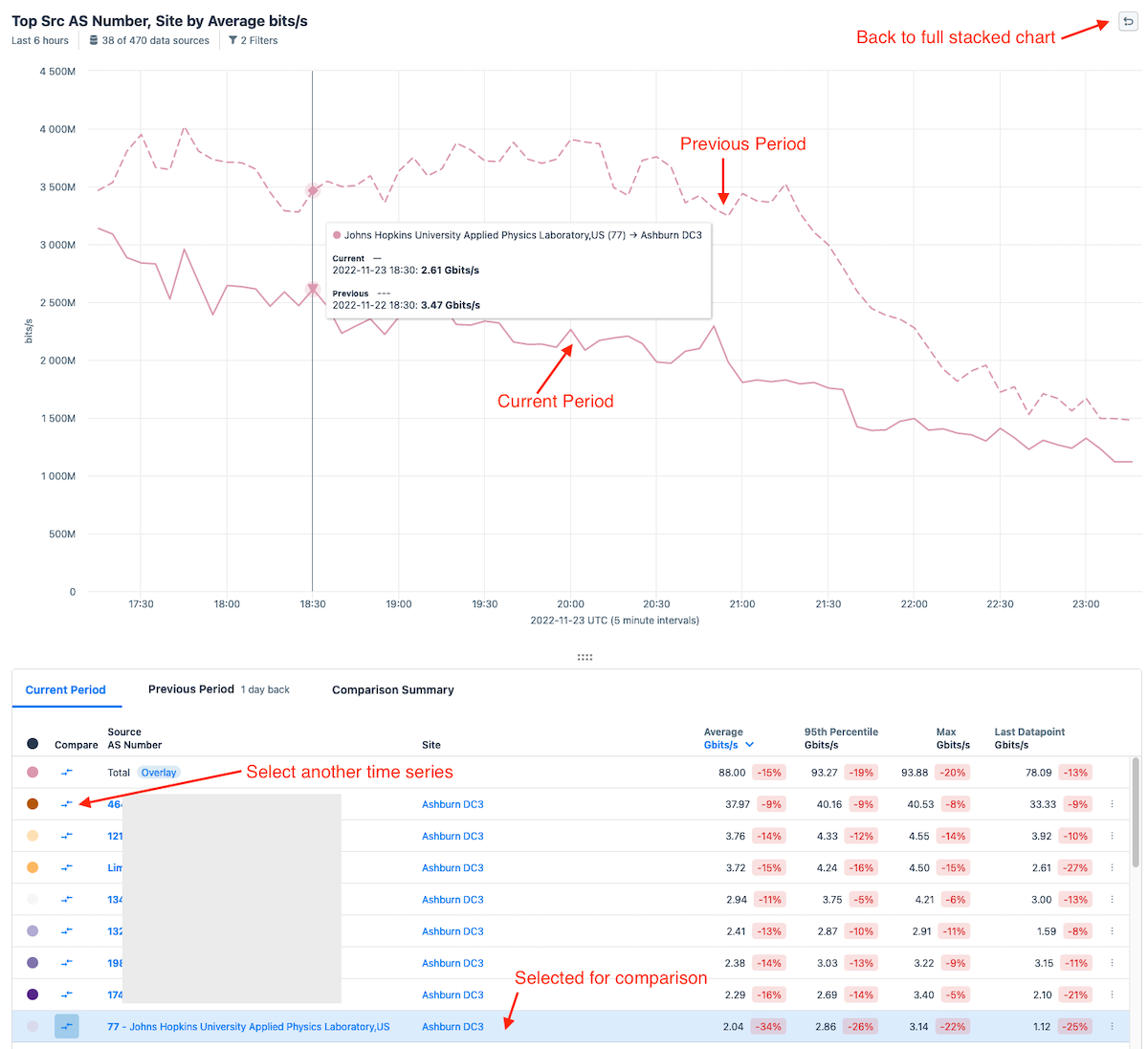 Switching between Current Period and Previous Period will display the full set of time series for either periods - always leveraging the same convention:

Now go ahead, play around with the feature and let us know what you think of it.
As always, you'll always find in Kentik Product Management a friendly ear to suggest improvements to this feature (and any other for that matter), do let us know!

Kentik’s Data Explorer is enriched with additional query options which influence how time series will be visualized and calculated. These options are located in the Advanced section of the query panel as shown on the screenshot below 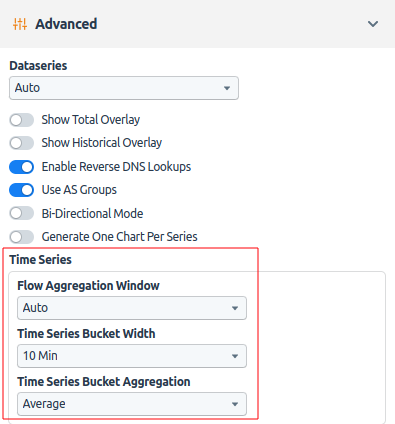 The Query execution performed against the Kentik Data Engine consist of the two steps:

Connectivity Costs is one of the workflows in the Edge module that seems to be the most successful with our users. It allows users to centralize the financial modeling of their Transit, Peering and IX contracts in one place, and track costs for each of these throughout the month, and every past month.
For a refresher on this workflow, take a minute to read this blog post from 2021 on Why and How to Track Connectivity Costs.

Today, we add quite a few highly anticipated features to it, read on!

The drawer with the invoice and contract expiry schedule is now collapsible, which was a common request from users whose contract dates are always the same: it can now be hidden, and the preference will stick for each user.

In the previous iteration of Connectivity Costs, interfaces has to be manually selected and added to the relevant Cost Group in order to bind them to a contract and financial model. For networks with a vast footprint, these external facing interfaces keep coming in and out of the picture, and users demanded to be able to manage this part of the configuration more efficiently. This is now done: from the already popular Capacity Planning workflow, we have ported the Dynamic and Static Interface Selector module into Connectivity Costs.

In addition, we've improved it significantly to make things even easier to maintain - amongst others, users can now assign interfaces in a cost group based on: 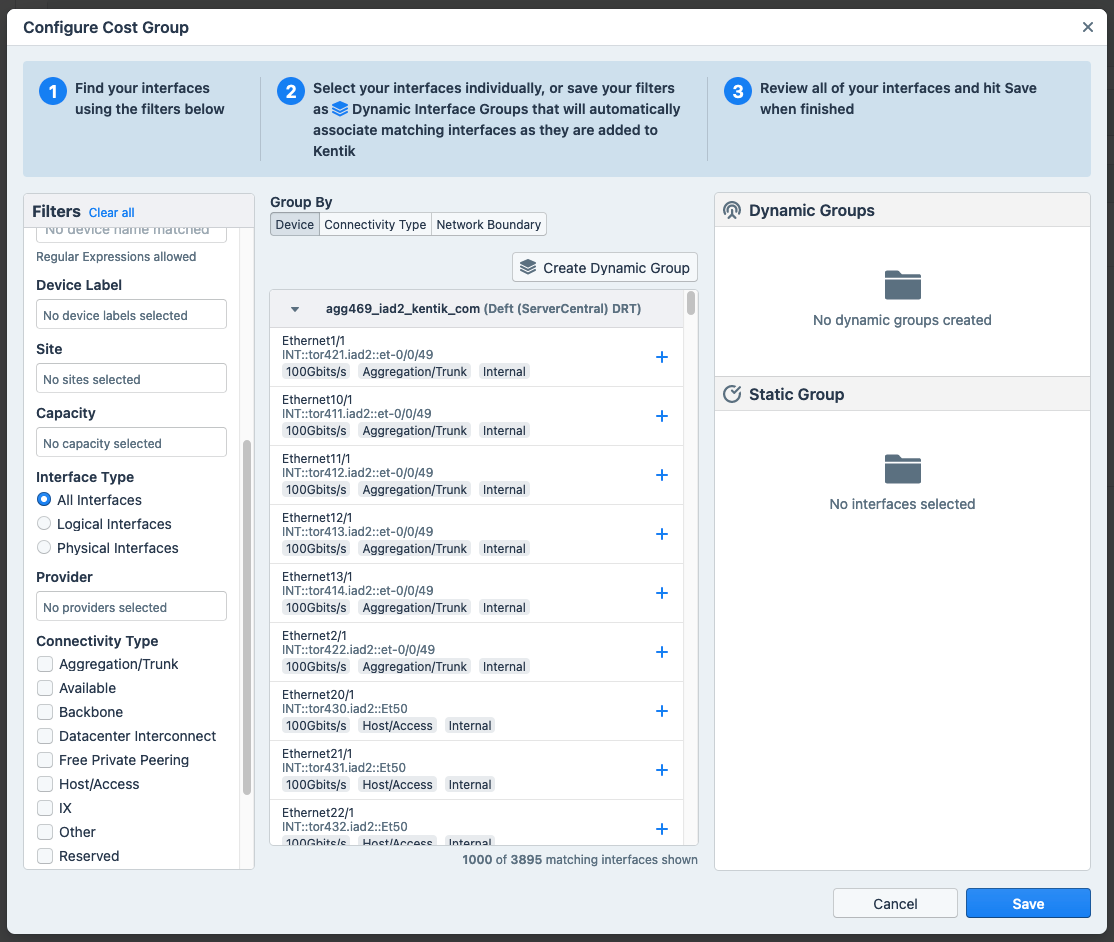 Interface or Group level additional costs expressed in any currency

Users can add Cost Group level (monthly or yearly) costs to their cost groups, but can add Interface Level costs as well. Until now, the currency of the parent Cost Group would be used to evaluate these additional costs into the daily computations.

With this release, users can now select the currency for both. Here's an example of where it comes in handy: optional interface charges are often used to document cross-connects. Our customers also tend to use local providers in whichever area they are sourcing bandwidth from. This often results in Bandwidth as documented in the Cost Group financial model being expressed in the local currency, and data-center cross connects (usually from a global data-center contract) expressed in another currency. Problem solved !

While at it, we made the Interface-Level UI for adding/editing costs more usable, see for yourself - in the example below, the cost group is in dollars and the interface charges for the cross connect in Euros. 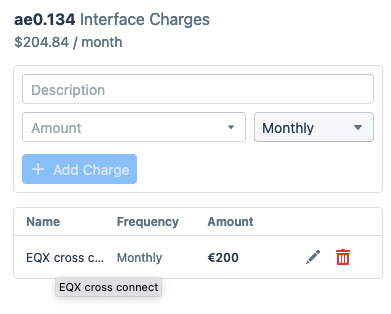 Based on feedback from our users, we also added a few new computation method flavors as to how our engine should compute monthly invoices. To the existing Peak of Sums and Sum of Peaks we added two new models:

And to make sure our users select the right one when configuring a cost group, we also gave better in-UI explanations of how each computation method works in the back-scenes: 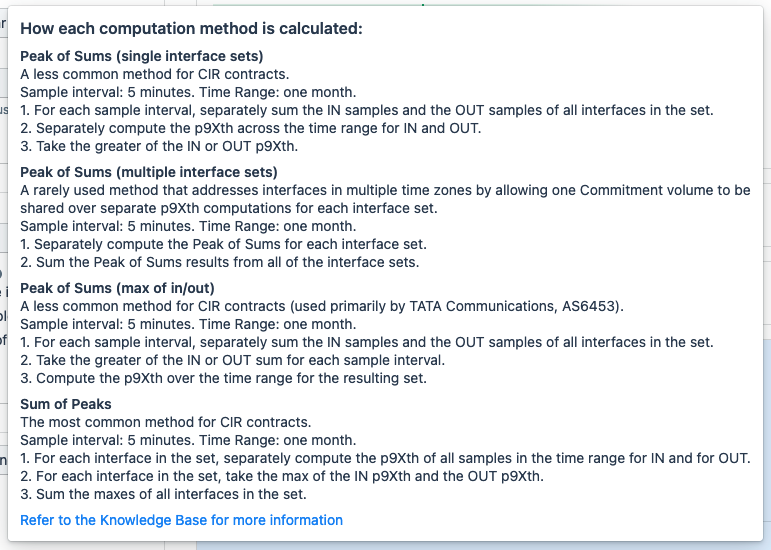 In future quarters, we are going to both extend the workflow to deal with non-edge costs, and also create functionality for users who have documented their costs into the workflow to be able to price any slice of their traffic.

Stay tuned, and in the meantime do let us know what you'd like to see next in this workflow !