This feature exposes the current audit log, with some minor enhancements, to administrators of Kentik. Audit Log helps avoid configuration errors or confusion between administrators as they make changes to the various configurations in Kentik. Audit Log also provides a layer of accountability to prevent unauthorized changes that may impact the customer’s security posture. The ability to zero in on changes, find misconfigurations, and find root causes are typical benefits of Audit Log. 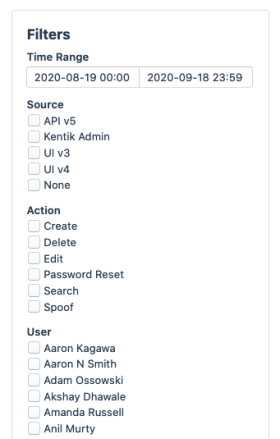 My Kentik Portal tenants are now able to partition flows across their tenants, leveraging custom dimensions. For example, this can be useful for tenants, provisioned on a layer two network, where their port’s MAC address uniquely identifies them. 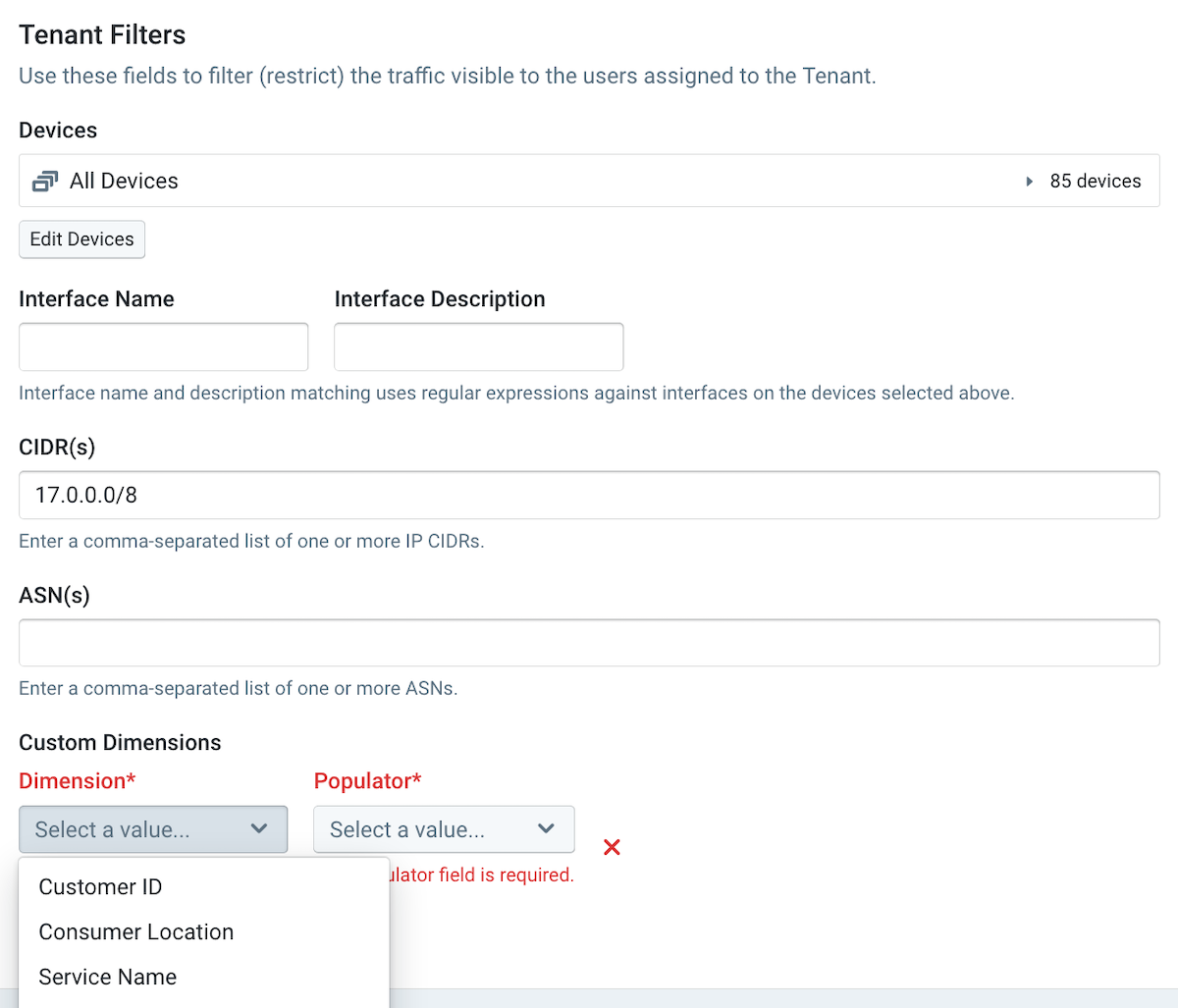 Any number of Custom Dimensions are supported. Each Custom Dimension selection is OR’ed. This is supported via a User Filter. You can automatically replace filters in dashboards that match tenants’ custom dimension definitions to provide inbound and outbound dashboarding capabilities.

Additionally, we have developed an algorithm that processes flow data associated with this interface and finds the best fitting root cause of the spike/drop. This Kentik Insight brings together SNMP interface metrics with Flow traffic. And our first Insight does two layers of algorithms.

Christoph Pfister
ImprovementCore
a year ago09/30/2020

Over the summer, Kentik announced a new partnership with Silver Peak, a market leader in SD-WAN solutions. The two companies offer advanced SD-WAN visibility to keep businesses and their networks operating optimally through the new partnership. For many enterprises, SD-WAN enables organizations to meet the network connectivity, performance and security demands of distributed and increasingly remote workforces. At the same time, enterprise network teams must overcome the visibility gaps across different parts of their distributed infrastructures, whether on-premises or in one or multiple clouds.

Since the announcement, Kentik has continued to expand support for Silver Peak, adding support for new IPFIX fields, including:

We have identified and improved several DDoS features as requested by our customers, with more to come.

Here is a summary of the recent enhancements:

Christoph Pfister
ImprovementCore
a year ago09/30/2020

Kentik now supports vendor-specific MIBs via SNMP device metrics. We are discovering the vendor, then polling the right OIDs and applying the right algorithms to construct a normalized dataset. This capability will allow us to poll a growing list of vendor-specific metrics in the future.

Device metrics are available in the following areas:

Kentik has introduced important new health features aimed at hybrid IT organizations. Site Health, Device Health, and Interface Health provide an at-a-glance easy indicator of how your network, devices, and applications are performing. They are now a standard offering in the Network Management product.

For customers that monitor all their global hybrid IT infrastructure, it is vitally important to separate what is healthy from what is not healthy. Engineers simply do not have enough time in the day to look at all the metrics. Kentik’s new health capabilities classify a base layer of metrics into Healthy, Warning, or Critical status and display the status in our next-generation Network Maps and Network Explorer.

Kentik metrics include CPU utilization, among others. A summary also appears in Hybrid Map.

We are monitoring network devices and interface metrics via SNMP. Health values available include:

Last month, Kentik introduced Hybrid Map, allowing teams to view the entirety of their network infrastructures, dive deep where needed, assess quickly, solve problems and gain insights immediately. You can now visualize and manage interactions within and between on-prem infrastructure, cloud infrastructure from Amazon AWS, Google Cloud, IBM Cloud, and Microsoft Azure, as well as internet platforms and services — all in a single, unified view. 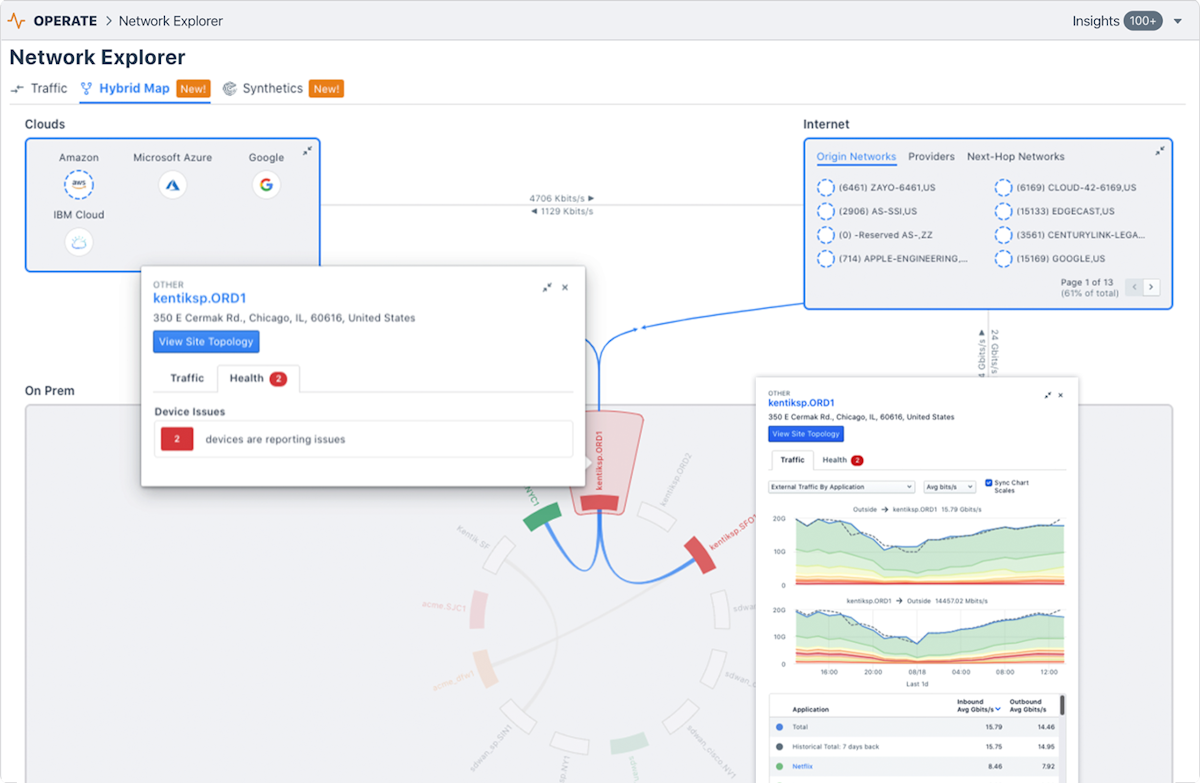 Go inside your cloud infrastructure to see how applications are communicating inside the cloud, to the internet, and on your on-prem network.

Since the initial release of Hybrid Map, Kentik’s updated release now includes visual directionality. This latest release covers inter-block flows (i.e., flows between a VPC and the internet, or between an on-prem site and an internet AS, for example), and directionality between sites and devices in the arc and chord layouts. 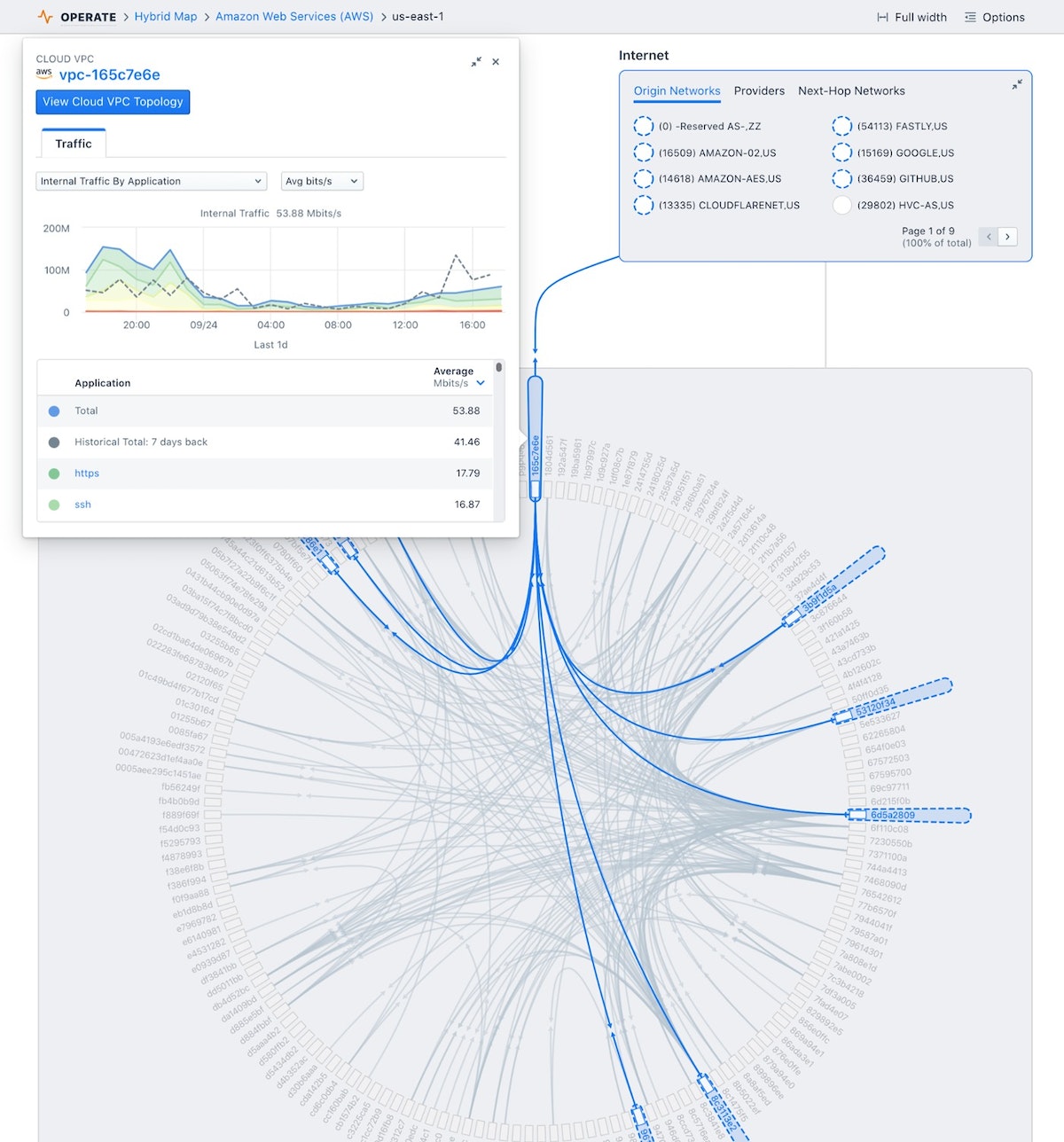 Directionality is now visible in the arc and chord layouts for Kentik Hybrid Map.

Users can now go to the Hybrid Map to see their traffic in context with health across all devices. The backend service that collects, stores, and assesses the metrics also looks at a device’s CPU, memory, and interface utilization statistics to determine health. The device layout includes CPU and memory utilization views, and Healthy, Warning, or Critical status up to the site level.

Users can now drill into cloud infrastructure from the Hybrid Map. Users can quickly see traffic between regions, VPCs, and subnets and traffic from the cloud to on-prem infrastructure and origin networks for AWS, GCP, and Azure. We’ve also released an excellent backend service that makes these views blazing fast.