Another new View Type feature we first announced last month was Geo HeatMaps. Initially available for queries whose group-by dimension was source or destination country or site, HeatMaps have now been extended to cover regions and cities as well.

As with countries, the mapping depends on the traffic attributable to the sites within a given region or city, which means that you must first use the Admin » Sites page to enter addresses for each of your sites (see instructions for Editing a Site in our KB).

A region HeatMap shows the total network traffic, inbound plus outbound, by each region (e.g. a state in the United States) based on the addresses specified specified for sites. In Data Explorer, choose the group-by dimensions Destination Region and Destination Country, and chose Geo HeatMap from the View Type selector at upper right of the display area. When you run the query, the resulting visualization should look similar to the below. For even more information, hover over a bubble (colored circle) on the map to open a pop-up, which states the location’s latitude, longitude, and total traffic. 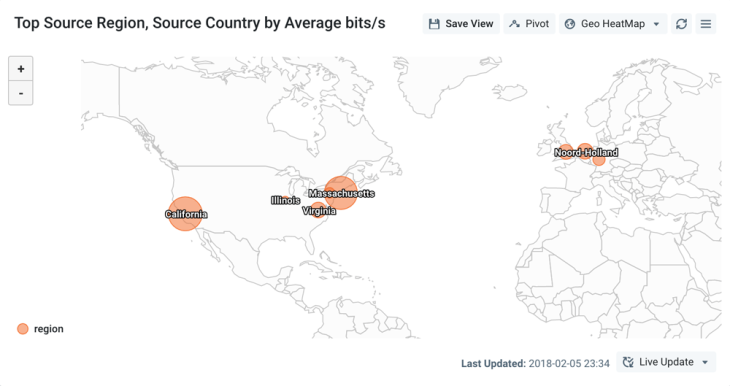 The city heatmap is very similar to the region heatmap, but it’s more granular because it drills down to individual cities. To get a visualization similar to the one below, add Destination City to the group-by dimensions we already had (Region and Country).

Like the other visualizations in Data Explorer, heatmaps can be turned into panels on a Dashboard so users can easily monitor traffic on a geographical basis.