Lots of additions in August and September 2021 in the Synthetic Monitoring department.
Almost every area of the product got new additions: from additional test frequencies (sub-second for the win !) to Page Load Test enhancements to Synthetic Test based dashboards, there's a lot for everyone, see for yourself ! 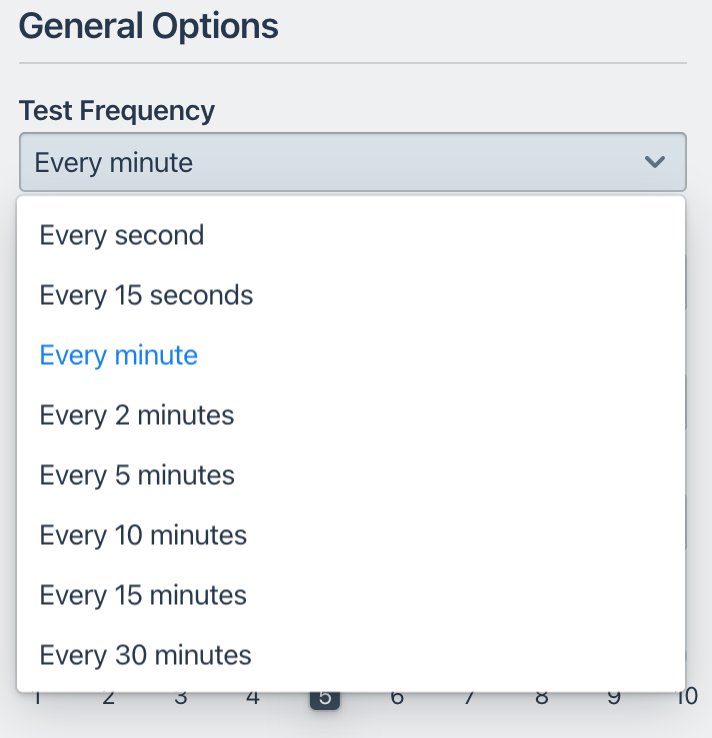 Network teams told us that they often don’t care about catching bad certificate issues and would rather “bypass” these failures to continue testing network performance. To achieve this, we have added support for ignoring TLS errors and exposed the option to configure this through the advanced settings for HTTP/API test types and Page Load test types. 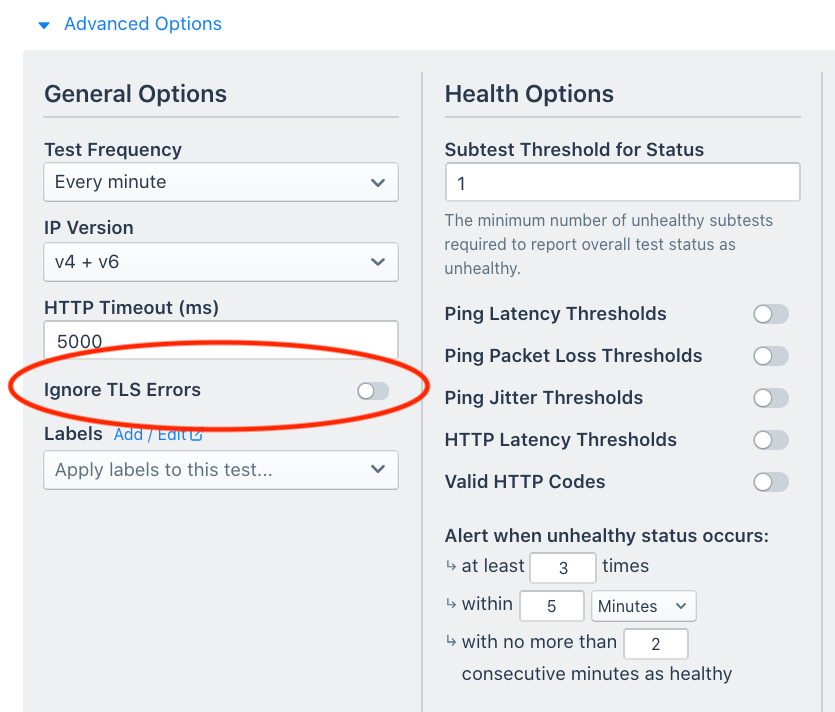 Previously, custom test thresholds were based on static values only. While this worked well on the surface, static thresholds are limited in practical use. Specifically, static thresholds cannot be used in mesh-type tests because each pair of agents would likely need a different value. Similarly, with multi-agent tests to a single target, if the agents are in different geographic locations, the expected latency for each is different, and it isn’t possible to specify a single value that satisfies them all. For all those reasons, we have added the option to specify thresholds for latency (including HTTP latency and DNS resolution time) and jitter that are based on a multiple of the baseline measurement. 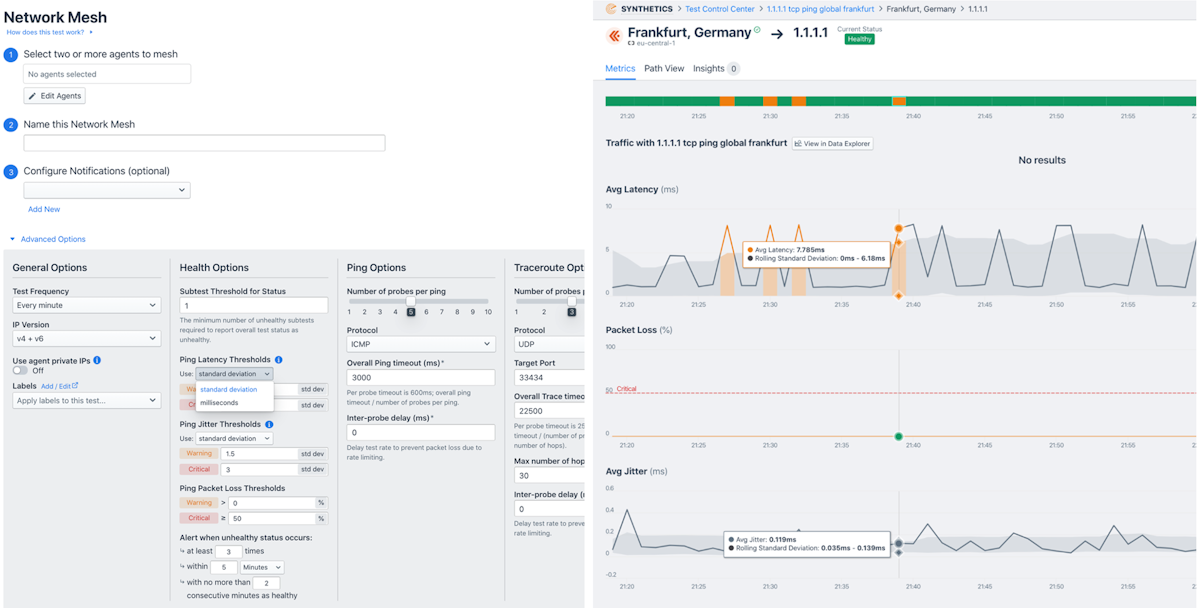 To build on our commitment to include tests to common infrastructure services that network teams rely on, we now include a new DNS Performance tab as a preset on the Synthetics Performance Dashboard.

This tab is built using the “DNS density grid” type of synthetic dashboard and features availability and uptime checks to 7 of the top/common DNS service providers from 15 geographically distributed global agents. Where available, two IPv4 and two IPv6 DNS servers are tested for each service. This allows customers to quickly rule out (or in) any DNS failures they see from “general issues” with the specific provider. 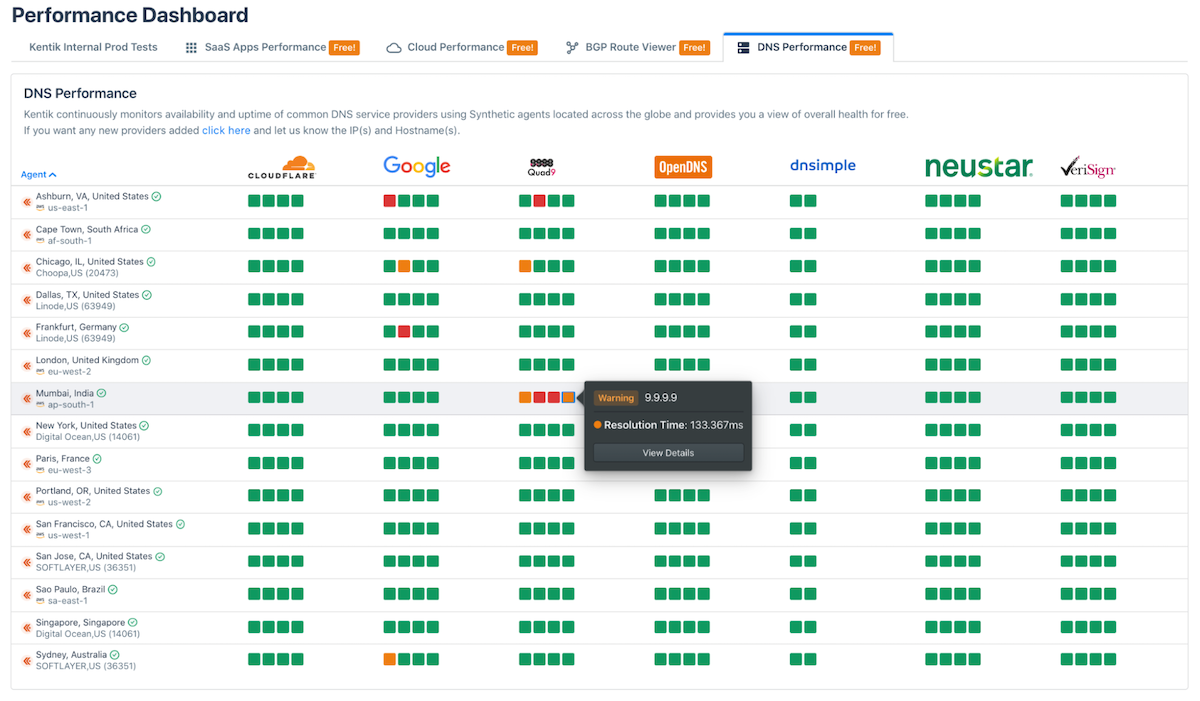 The SaaS Performance tab on the performance dashboard was the very first preset tab when we launched Synthetics back in October 2020. At that time, this was a basic “hostname” test which is essentially just a ping and trace. Since then we have introduced much better tests that are capable of testing both HTTP layer and network layer performance, so in the spirit of “upgrading” to the latest, we have migrated all our existing SaaS performance tests to the HTTP or API test type. 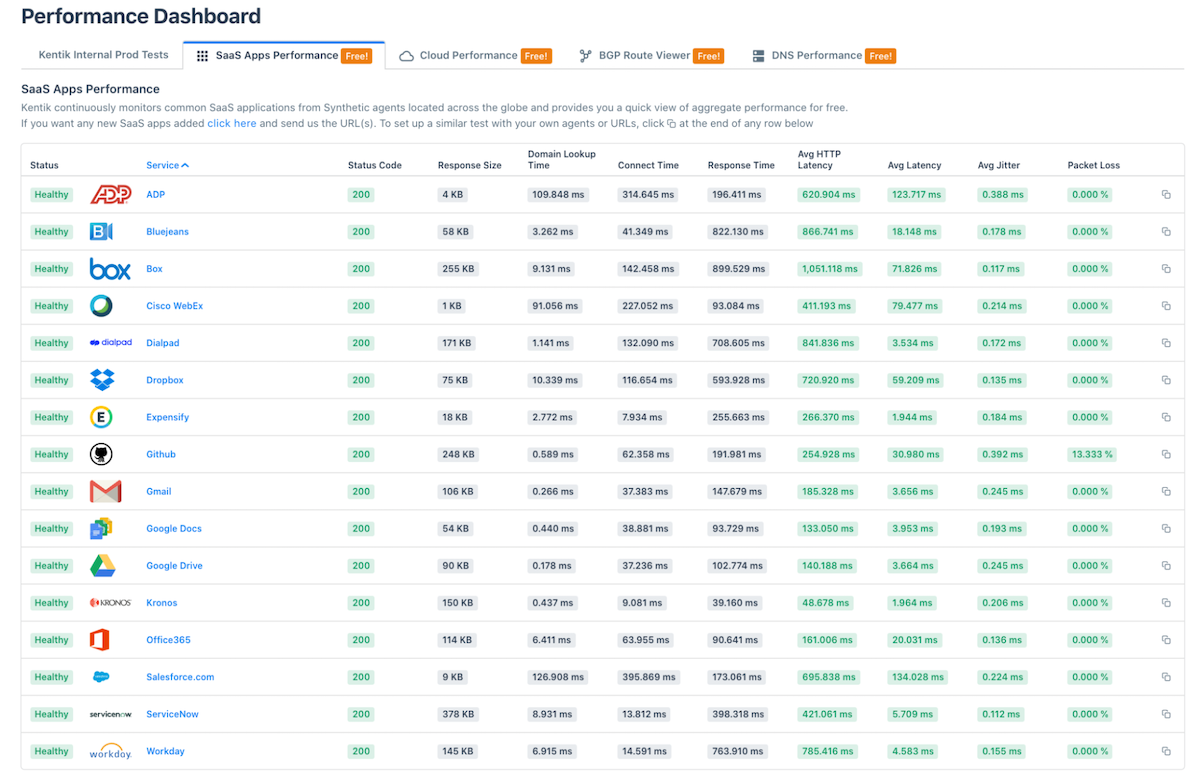 Our browser Page Load tests (only supported on app agents) are enhanced with “Asset Validation.” 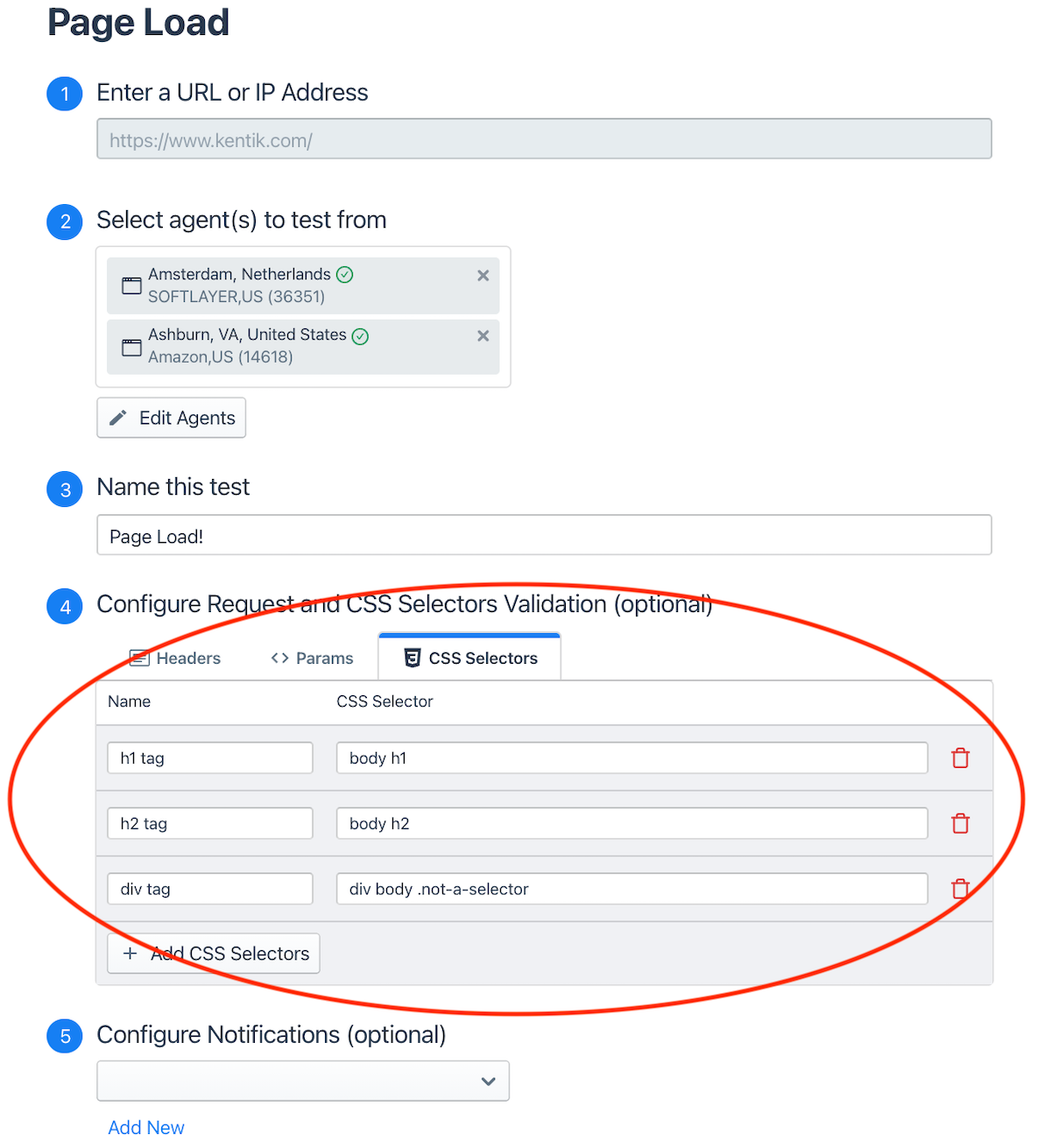 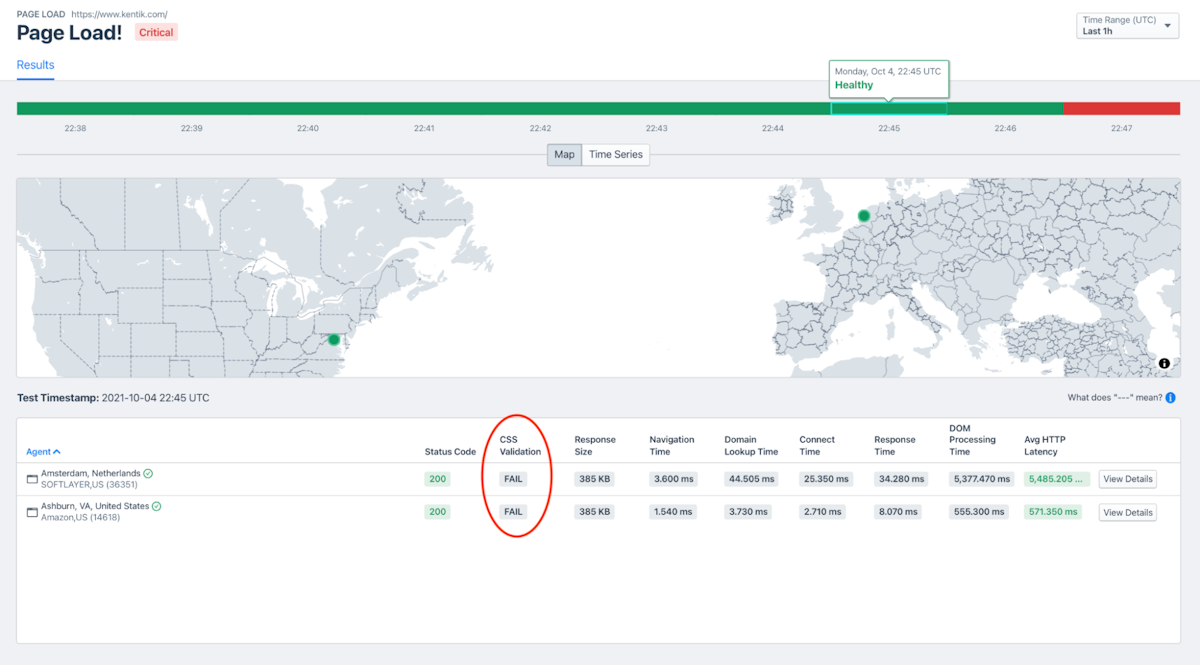 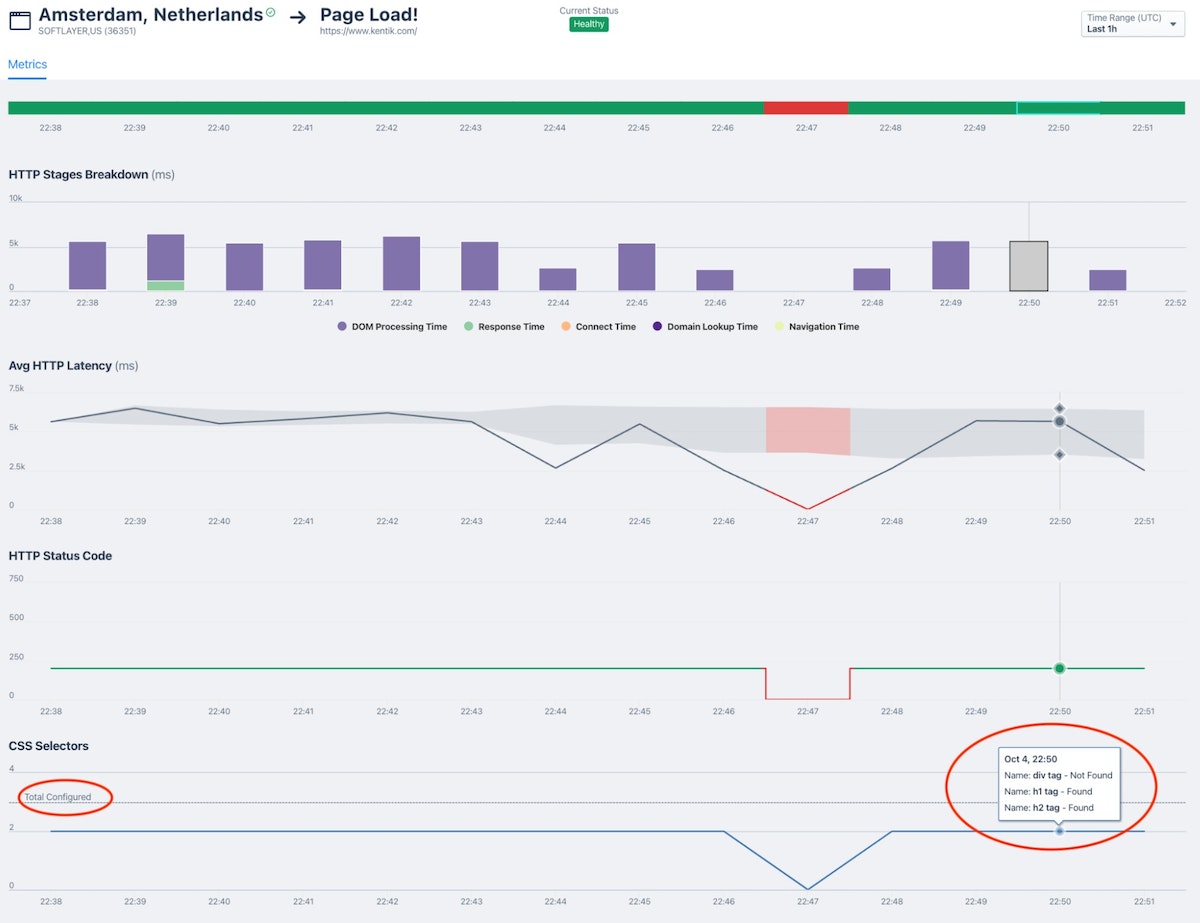 One of the common use cases for Synthetics is to benchmark one’s own performance against competitors as well as to compare and contrast one’s services’ performance from different parts of the world. Customers will often configure multiple tests (one set for their services and one for competitors, or tests in different parts of the world, labeled by regions) and will want to see an aggregated view. To help, we are leveraging the Kentik dashboards (Library).

There are two possible widget types:

When creating a custom dashboard widget with Synthetic data, users now have the option to choose a “Panel Type,” which may be either “Single Test” (the existing type) or the new “Multiple Test” type, which aggregates data across multiple tests. When the “Multiple Test” option is selected, the user has the option to specify the “Test Type,” “Display Type” and “Metric” that they want to aggregate data on. Optionally they can also specify agent labels that will be used to group results by in the table. 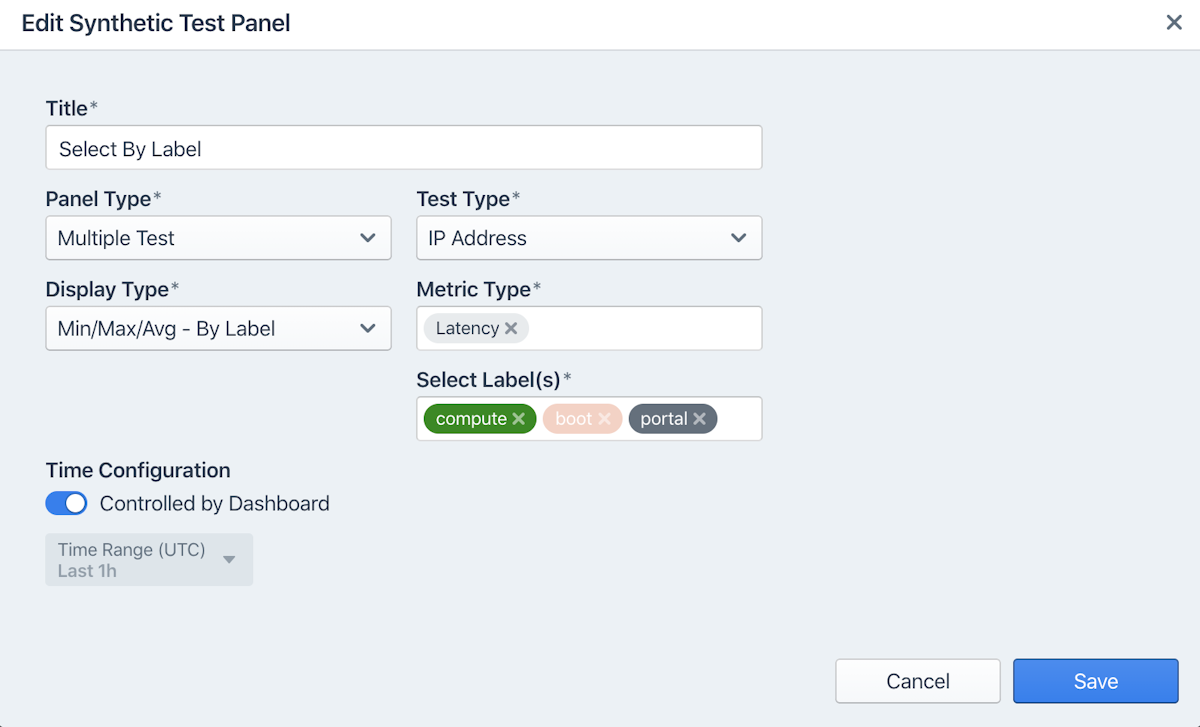 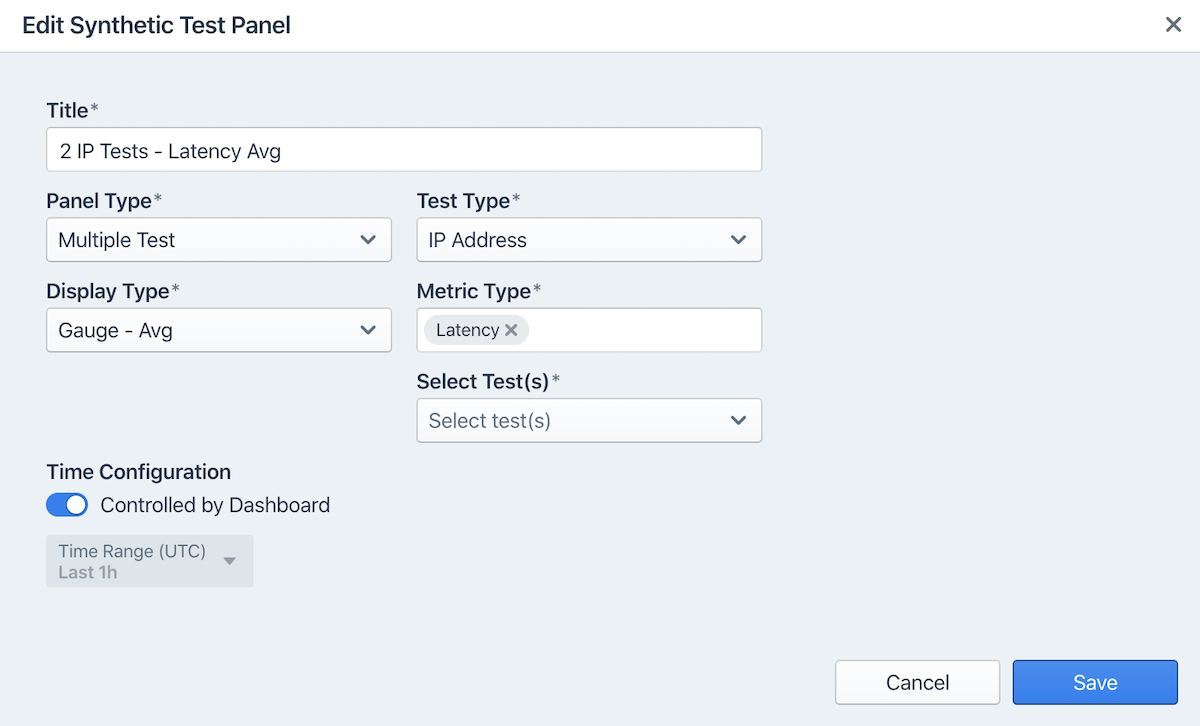 Results are displayed either as a table with each row showing aggregated values for the selected metric grouped by agent labels (user configurable).

Or as gauges showing the average metric:

These widgets can be combined with the existing widget types to produce some useful dashboards. 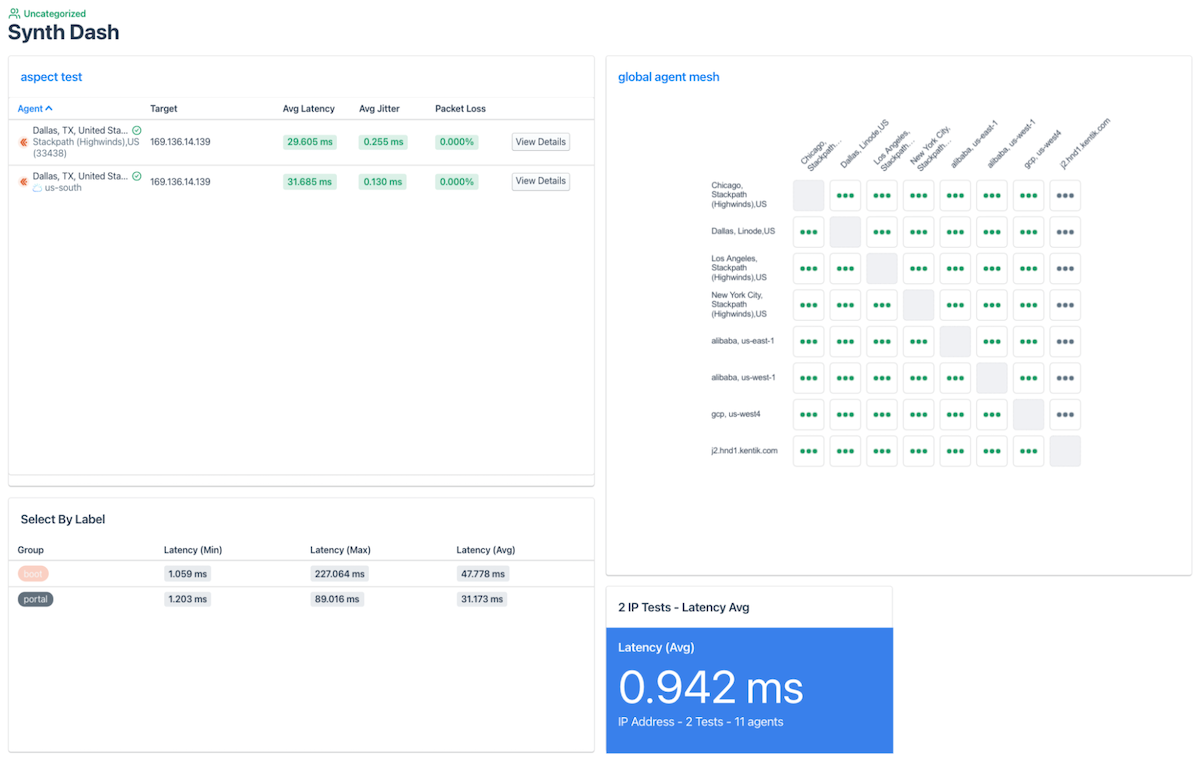 We now have notifications available for BGP tests via email and other notification channels. 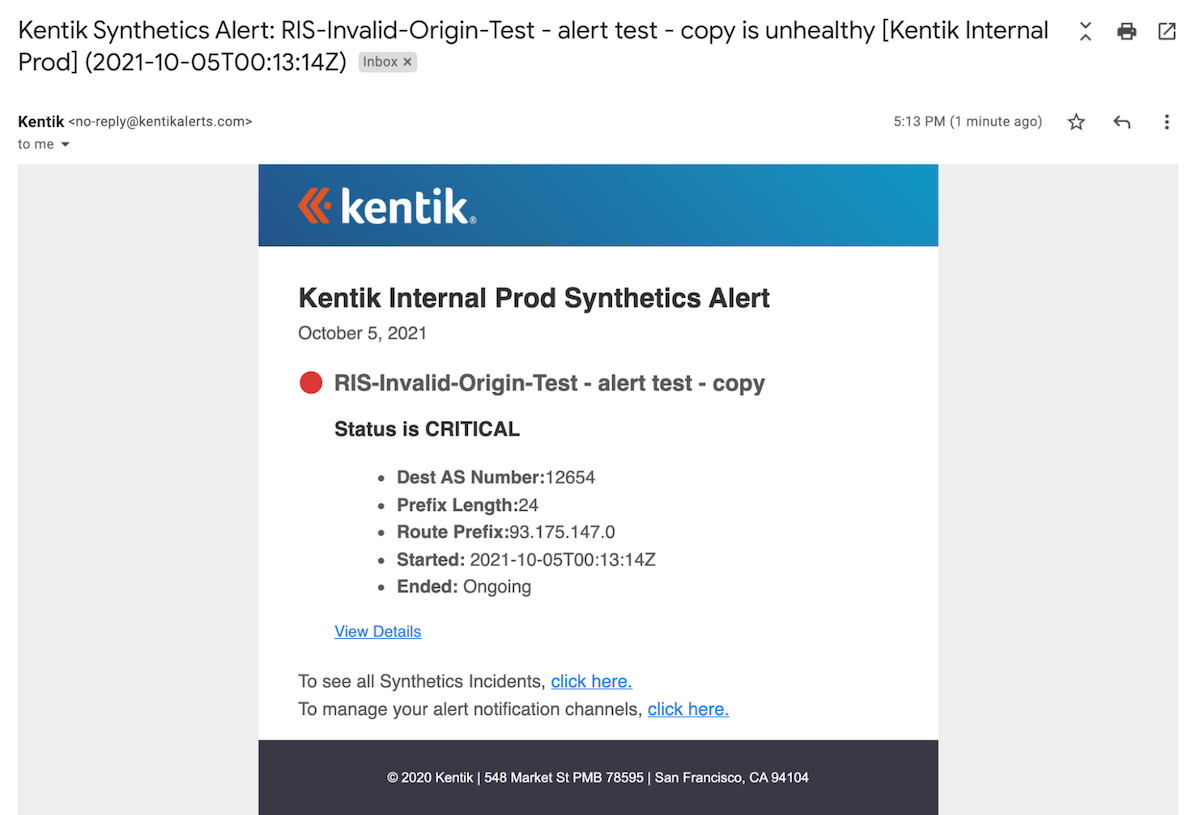